Constrains circles, arcs, polyline arcs, ellipses, and elliptical arcs to have the same center point, making them concentric. (This command is equivalent to using the Concentric option of the GeomConstraint command.)

Note: The second entity that you select is moved to be concentric to the first entity. 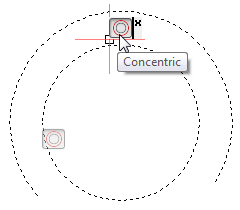