Constrains two entities to maintain a point of tangency to each other, or to their extensions. (This command is equivalent to using the Tangent option of the GeomConstraint command.)

Note: The second entity that you select is moved to be tangent with the first entity.

After you place the constraint, icons appear near the entities indicating the type of constraint. If you do not see them, then use the ConstraintBar command to display them. To remove a constraint, click the tiny x on the constraint bar: 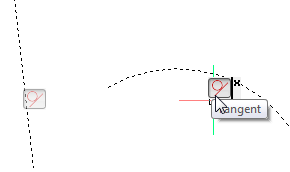