Constrains a line, linear polyline segment, or a pair of points to lie parallel to the Y-axis in the current coordinate system. (This command is equivalent to using the Vertical option of the GeomConstraint command.)

Select an entity or [2Points] <2Points>: (Select a line or linear polyline segment, or press Enter to select two points on one or two entities)

After you place the constraint, icons appear near the entities indicating the type of constraint. If you do not see them, then use the ConstraintBar command to display the icons.

Pause the cursor over one of the icons to see the location of the vertical constraint, shown by the two large X markers: 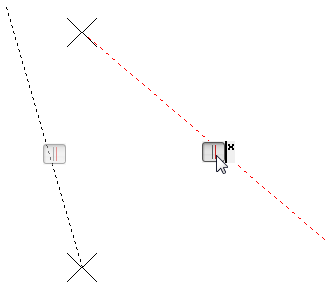