Constrains one line or polyline segment to be collinear with another one, which means they lay in the same line. (This command is equivalent to using the Collinear option of the GeomConstraint command.)

Note: The second entity you select is straightened out to be collinear to the first.

After you place the constraint, icons appear near the entities indicating the type of constraint. If you do not see them, then use the ConstraintBar command to display them. To remove a constraint, click the tiny x on the constraint bar. 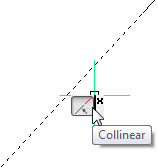