Constrains two lines or polyline segments to lie perpendicularly to each other. (This command is equivalent to using the Perpendicular option of the GeomConstraint command.)

Note: The second entity that you select is moved to be parallel with the first entity.

To remove a constraint, click the tiny x on the constraint bar: 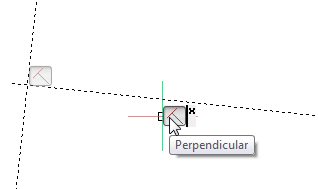