Point clouds in BricsCAD has changed significantly in BricsCAD V20 compared to V19: improved data representation and the introduction of a point cloud cache manager.

Before, data needed to be explicitly preprocessed before attaching them to a dwg. Now, this process is simplified by our new point cloud management system.

For the following example, we used a dataset publicly available on https://www.navvis.com/m6-pointclouds. The source file contains 63 million points and takes about 2 minutes to import. 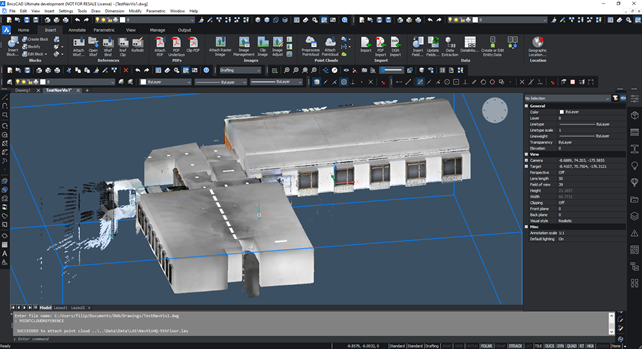 Fun tip: use the NAVIGATE command to walk inside an imported point cloud.

For the example above, the screenshot below shows an impression from inside the point cloud. 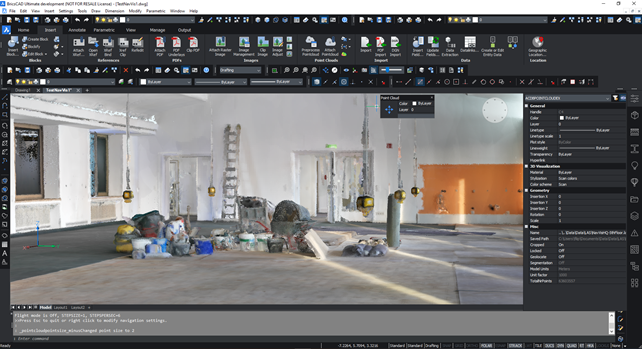 This can now be done directly by attaching such data to the dwg. The preprocessing is executed in a background process and you are notified when it is ready.

Then, the point cloud data display after a simple REGEN.

To send a .dwg file with point cloud data attached to another user

When you create a new dwg at the same relative path to the point cloud source data and you want to attach these data to the new dwg, the caching recognizes the file location and the data is immediately attached and displayed.

POINTCLOUDIMPORT: When a point cloud was already preprocessed outside the caching system (like a beta of V20 or the Bricsys VR software Insight), this command lets the user import those data into the cache manager.

POINTCLOUDREFERENCE: opens a dialog to let the user select a dataset from the cache and attach it to a dwg.

POINTCLOUDDELETEITEM: opens a dialog to let the user select a dataset from the cache to delete it from disc.

Other new features in V20:

For legacy reasons, attaching old bpt files will still be supported in V20, but new bpt files can no longer be created. After V20, support for bpt files will be dropped completely.

The rest of the functionality remains the same: