Overview: In this lesson, you will learn how to import and underlay Autodesk® Revit® files in BricsCAD.

Disclaimer: Unless otherwise indicated, the word "Revit" used in this article refers to the Revit® software and its peripherals by Autodesk®.

The Revit import function allows you to import .RVT files into BricsCAD as 3D solids or as a geometry underlay for referencing purposes. However, any project data and model metadata, i.e. Constraints, Wall Type structure assembly, materials etc., from the Revit model are not imported.

You can also choose to import selected geometries by 3D Views, by Family Categories, by Levels or by View Worksets, depending on how the Revit project file has been set out.
If you import the RVT file as a solid, only the geometry will be imported with no BIM metadata attached to it. The solids can later be classified and edited with direct modelling tools in BricsCAD.

If you import the RVT file as an underlay, almost like how an XREF is used, the BricsCAD model performs faster and smoother generally. This process also takes a shorter time than importing as a solid. However, the underlay model becomes an OdRvtEntity, like an uneditable, singular block. This method is particularly useful if you are looking to import the Revit model only for reference and coordination purposes, i.e. importing a Revit structural model to look for clashes with your architectural / MEP model within BricsCAD.

BricsCAD V21 currently supports the import of Revit 2015-2020 files only. If you would like to import a model created in a later version of Revit, please consider importing the model into BricsCAD as an IFC file. For more information, please visit the IFC Import and Export in BricsCAD article.

Procedure: Importing a Revit file as a solid in BricsCAD

​Procedure: Importing a Revit file as an underlay in BricsCAD

Texture and graphics of the imported geometries

Although project information and element metadata in a Revit model cannot be brought into BricsCAD (just yet), there are some aspects of the imported 3D solids, i.e. Material Color, Transparency, which can be brought over and therefore correspond to the original graphics set in the Revit.

To retain the consistency of the graphical information during the import process, ensure your RGB color and transparency settings set in Revit’s Material Browser are set to your desired values.

In the example below, the values taken will be RGB 149 134 119 and 0 (%) for the colors and transparency values respectively. 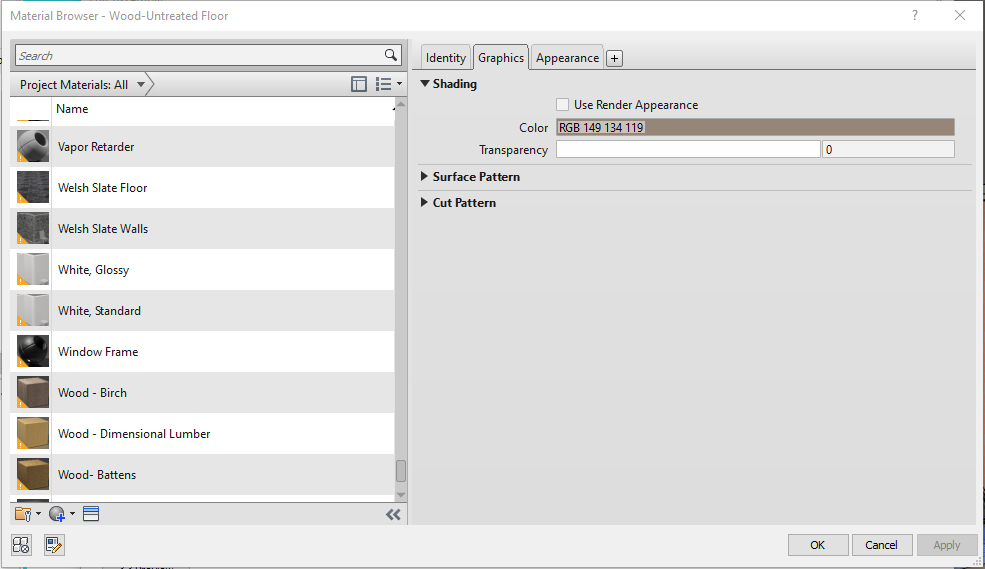 If the imported element is a Revit System Family with the ability to define its structure assembly, i.e. Wall Type, and is made up of various layers of materials or functions, BricsCAD applies the color template values from the outermost materials (on both the Exterior and Interior sides) accordingly on to the corresponding geometry’s faces.

Let's take an example from the illustration below, the values will be derived from the materials assigned on Layers 1 and 9, which are Cladding... and Plaster respectively.

Otherwise, BricsCAD applies the color value, and the transparency settings if applicable, to the 3D solid replacing the respective parts of the Revit Family. This also applies to those Loadable Families and Components, having loaded into the imported Revit project.