The Generated Drawing Views functionality allows to automatically generate associative orthographic and standard isometric views of a 3D solid model. All drawing views are placed in a paper space layout, they are not visible in model space.

Analytical hidden line removal (HLR) procedures are used to create the drawing views using standard 2D entities, mostly lines and arcs. Much like the result of the FlatShotcommand. Drawing views created in V14.1 will be automatically converted into HLR geometry by the ViewUpdate command. 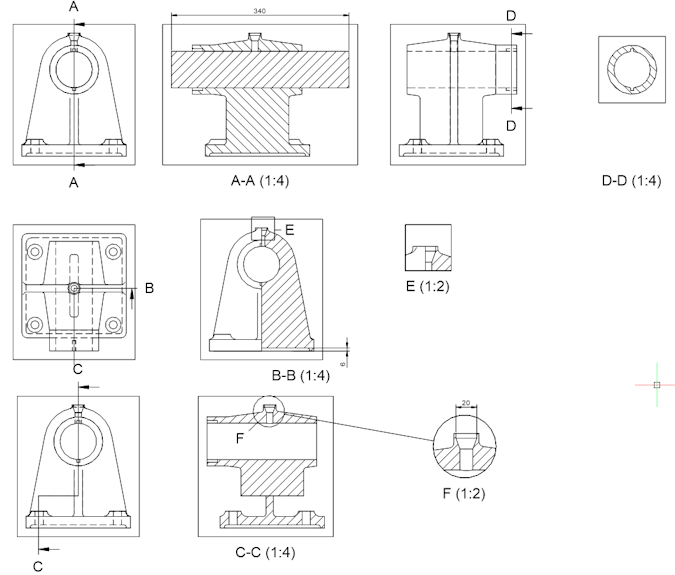 The ViewBase command generates associative orthographic and standard isometric views of a 3D solid model in a paper space layout.

The ViewSection command creates a cross section view based on a standard drawing view generated by the ViewBase command in a paper space layout.

The ViewSectionStyle command allows to modify the appearance of the section views created by the ViewSection command.

The ViewDetail command creates a detail view of a portion of a standard generated drawing, at a larger scale.

The ViewdetailStyle command allows to modify the appearance of the detail views created by the ViewDetail command.

The ViewExport command exports the content of drawing views obtained by ViewBase and ViewSection to the Model Space of the drawing. This command can be used in paper space only.

The ViewEdit command allows changing the scale and the hidden line visibility of drawing views.

Tools to generate drawing views of your 3D solid model are available on:

The Drawing Views toolbar, which is a flyout of the View toolbar: 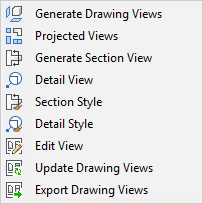 The Drawing Views panel of the Annotate Ribbon tab.

In a technical drawing, a multiview orthographic projection is an illustration technique in which up to six images of an object are generated, with each projection plane parallel to one of the coordinate axes of the object.

Isometric projection is a method represent three-dimensional objects in two dimensions in technical and engineering drawings. It is an axonometric projection in which the three coordinate axes appear equally foreshortened and the angles between any two of them are 120 degrees.

To generate the standard views of your 3D solid model, run the ViewBase command from model space.

Two projection planes, one horizontal (H.P.) and one vertical (V.P.) divide the space in four quarters. 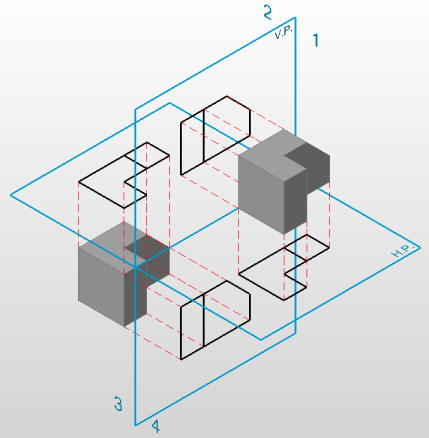 With multiview orthographic projections, up to six pictures of a 3D model are produced, with each projection plane parallel to one of the coordinate axes of the model. The views are positioned relative to each other according to either of two schemes: first-angle or third-angle projection. In each, the appearances of views may be thought of as being projected onto planes that form a 6-sided box around the model. 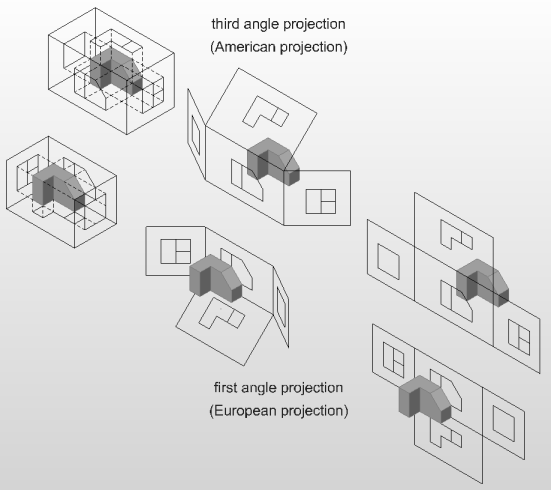 The projection type is set by the Projection Type option of the ViewBase command or by editing the PROJECTIONTYPE system variable:

The value of the PROJECTIONTYPE system variable is saved in the drawing.

The display of the BM_Isometric_Hidden layer is turned off by default.

Additional projected views can be added using the ViewProj command. A projected view inherits the scale, display settings and alignment from the parent view.

A cross section is the intersection of a 3D solid model with a section plane. In technical drawings, the internal parts of the 3D model are hatched in cross sections.

To generate section views of a 3D solid model, run the ViewSection command from the paper space layout where the standard drawing views exist. 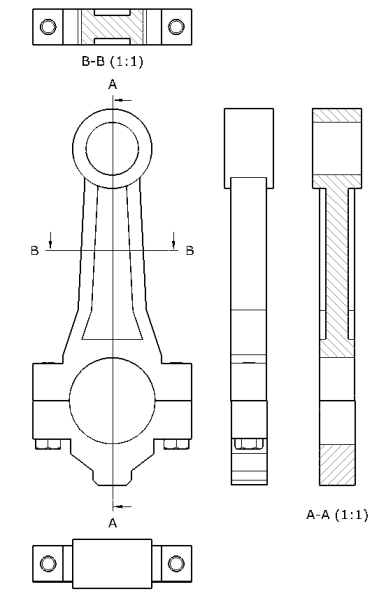 By default BricsCAD checks whether the source 3D solid model was modified and automatically recalculates the drawing when:

The associativity mechanism of drawing views in a paper space layout allow limited control by the user. Such views can be moved or scaled, but you cannot edit the geometry. In order to get the full control to the drawing views geometry the ViewExport command allows to move or copy drawing views to model space or to a separate drawing. Exported drawing views loose their associativity with the 3D model and become standard blocks, which can be exploded, edited, erased, etc&ldots;

The first time the ViewBase command is launched, four new layers are created:

Use the ViewEdit command to change the visibility of these layers for all view or for selection of views only.

Use the ViewDetailStyle command to adjust different properties of details views such as: